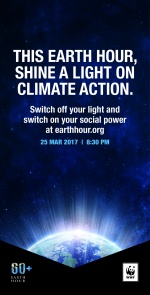 Atrium belgrade offices for the third year in a row will join the global action "Earth Hour" organized by WWF (World Wide Fund for Nature).

On Saturday, 25 March 2017 from 20: 30h-21.30h, cities around the world will turn off lights for one hour the eleventh time. This watch is just a little reminder that we can intervene to change things and the small things that we do every day can create more humane future.

Action "Earth Hour" is a global campaign which include individuals, organizations, institutions and companies with a common goal - to send a strong message that it is possible to take action to mitigate climate change and that with small change of our daily habits to benefit the planet and ourselves who live on it.

Global action "Earth Hour" in the world known as Earth Hour, will be marked on all six continents. The WWF believes that this year more countries will participate in than last year when there were 178.In Serbia, campaign supported 85 cities, 180 schools, 92 NGOs and 75 companies, while during major events spectacular 3D mapping projection of illuminated messages the facade of the City of Belgrade.

Among the companies that support this action in the building Atrium Belgrade offices are:

Atrium Consulting Company, which operates and maintains the facility will arrange that the lights in public spaces and advertising are turned off at this time at the facility. One hour we spend in the dark should serve as a reminder that we need to ensure the sustainable future of our planet.

Meet us at MIPIM